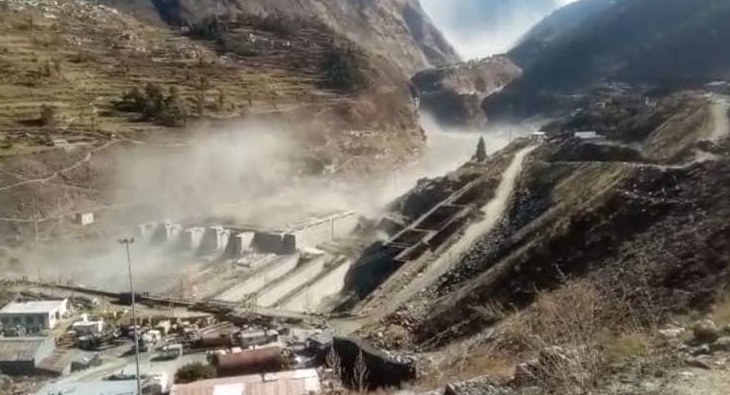 Uttarakhand glacial burst: Sudden outburst of a glacial lake with debris shows that degradation of the forest cover in upper reaches and faster melting of snow due to climate change, experts said.

Read More: Reconsider the Seventh Schedule
The Snow and Avalanche Study Establishment (SASE) of the Defense Research and Development Organization is still investigating the matter and has not yet zeroed in on the exact reason for the flooding as yet. “Our team is there. We do not suspect an avalanche. There may be glacial lake formations, but we cannot say with certainty now. We are investigating the entire region,” said Jimmy Kansal, joint director at SASE.

*A glacial breach likely caused an avalanche and breached a lake uphill of Raini village in Campoli district, located on the boundary of the Nanda Devi biosphere reserve, experts say.

*The breach led to water surge in Dhauliganga river and its tributary Rishiganga early in the morning.

*Around 10:30am, a police constable at the Joshimath police post informed authorities about the surge of water near Raini village and an alert was sounded for downstream areas.

Rishi Ganga: The Rishi Ganga hydel plant on the Rishiganga river was the first to be hit by the breach in the district. An upstream dam – Rishi Ganga – constructed to divert water was washed away.

Tapovan: The second major project affected by the flooding was the NTPC Tapovan hydel plant on the Dhauliganga river. As many as 148 workers are missing from the NTPC project

Officials say high river flow was noticed up to 100 km from Raini village. Experts said 4,000 cusec of additional water was there in the rivers. Apart from Raini and the two projects, no other village saw any impact.

Sudden outburst of a glacial lake with debris shows that degradation of the forest cover in upper reaches and faster melting of snow due to climate change, experts said. Warmer January and February could have resulted in the formation of the glacial lake. The back-to-back dams (Rishi Ganga and Tapovan dams were within 10 kms of each other) block natural flow of rivers that helps in disbursing heavy debris.