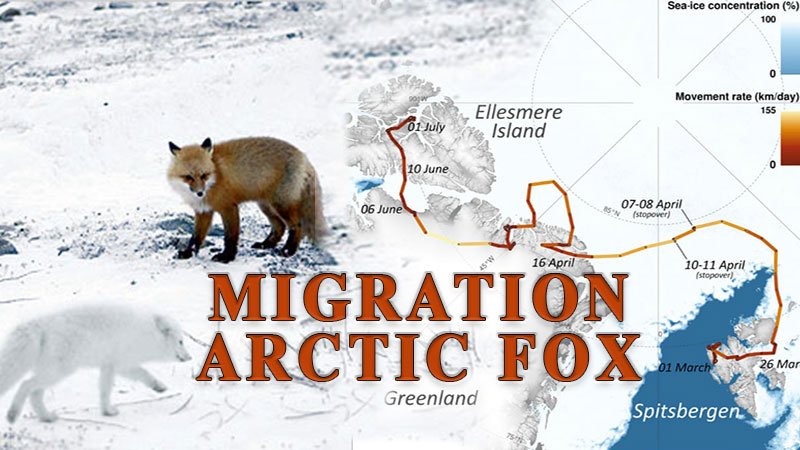 The journey of a young arctic fox, which trekked more than 2,175 miles (about 3,500km) from Norway to Canada in just 76 days, has stunned researchers and shed new light on the movement of the species over vast distances of sea ice.

The animal, also known as a coastal or blue fox, set off from the Svalbard Archipelago of Norway last year and ended up on a remote island in northern Nunavut, Canada, according to a study in ‘Polar Research’.

The areas are connected seasonally by sea ice, and much of the journey was completed over vast stretches of the frozen Arctic Ocean. The fox also passed through Greenland, but kept forging further west, the researchers’ data showed, moving quickly across the ice sheets where food was scarce and conditions were harsh.

While this type of arctic fox has long been known for its endurance in the barren polar climate, such a fast transcontinental journey has never been documented before.

The feat had prompted disbelief. “They thought that the fox have been found dead, the collar taken off and now aboard a boat.

But no boats could travel that far north through the ice, so they knew it had to be the fox that was still on the move.

The animal left Spitsbergen in the Svalbard Archipelago on March 26, 2018, and reached Ellesmere Island in Nunavut 2 1/2 months later.

Using a satellite tracking device, researchers determined that in one day alone, the fox, a female, had traveled about 96 miles (over 154km).

“This is, to our knowledge, the fastest movement rate ever recorded for this species,”. The study indicated that the trek may have been prompted by a lack of available food or by the need to seek a new habitat. Sea ice plays a vital role in foxes’ ability to migrate between areas and find resources, the study noted. But that ice has become increasingly threatened as a result of climate change.

Source :  The Times of India