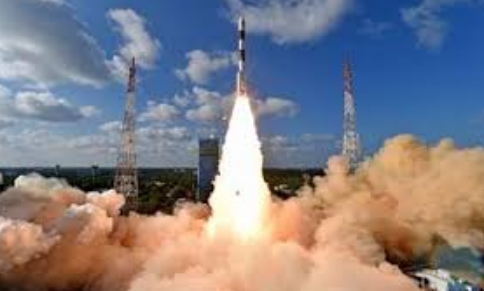 ISRO releases an image of the launch of PSLV-C51 carrying Brazil’s Amazonia-1 and other satellites, at the Satish Dhawan space center in Sriharikota on Sunday.
A photograph of Prime Minister Narendra Modi and a copy of the Bhagavad Gita was sent to space aboard an Indian start-up satellite, which was one of the 18 co-passengers launched with Brazil’s earth observation satellite Amazonia-1 in a one hour 55 minutes long mission.
The PM’s picture was engraved on the top panel of the spacecraft Satish Dhawan Sat (SD-SAT) from Chennai-based Space Kids India (SKI). “This is to show solidarity and gratitude for his (PM’s) Aatmanirbhar initiative and space privatization,” SKI had said earlier.

SKI said besides the picture of Modi, it was also sending 25,000 names aboard the SD-SAT.

Congratulating ISRO, the PM said it ushered in a new era of space reforms in the country.

This was one of the longest ISRO missions, beaten only by the PSLV-45 mission that launched an Indian reconnaissance satellite along with 28 customer satellites and three payloads on the fourth stage of the launch vehicle in three hours in April 2019.

The fifty-third flight of the Polar Satellite Launch Vehicle (PSLV-C51) was the first fully commercial mission of the New Space India Limited, the commercial arm of the department of space set up by the Centre in 2019. It also became the first mission to carry satellites developed by the Indian industry.

A three-satellite combination developed by students from three universities and a satellite of the Defence Research and Development Organization for maritime traffic monitoring were also launched.

Read Also:India and China standoff and its effects

The earth observation satellite of an Indian start-up Pixel, which plans to set up a 30-satellite constellation, was scheduled to be launched in the same mission but was withdrawn because of some software glitch.

The Amazonia-1 satellite is the first satellite to be designed, fabricated, and operated by Brazil through its National Institute for Space Research. It was the primary satellite of Sunday’s mission and carried on board wide field imaging cameras for earth observation. “I am extremely happy to declare that PSLV C51 successfully launched in the precise orbit of Amazonia 1 today. In this mission, India and ISRO is extremely proud and honored and happy to launch the first satellite designed, integrated and Operated by Brazil. My heartiest congratulations to the Brazilian team for this achievement,” said ISRO chairperson Dr K Sivan.

The Brazilian Minister for science, technology and innovation Marcos Pontes, who was present at the ceremony, said, “I would like to thank each and every one of you who helped make this a successful launch. We have been working on this satellite for many years. This is a very important moment for Brazil.” The space agency has fourteen missions planned for the year.