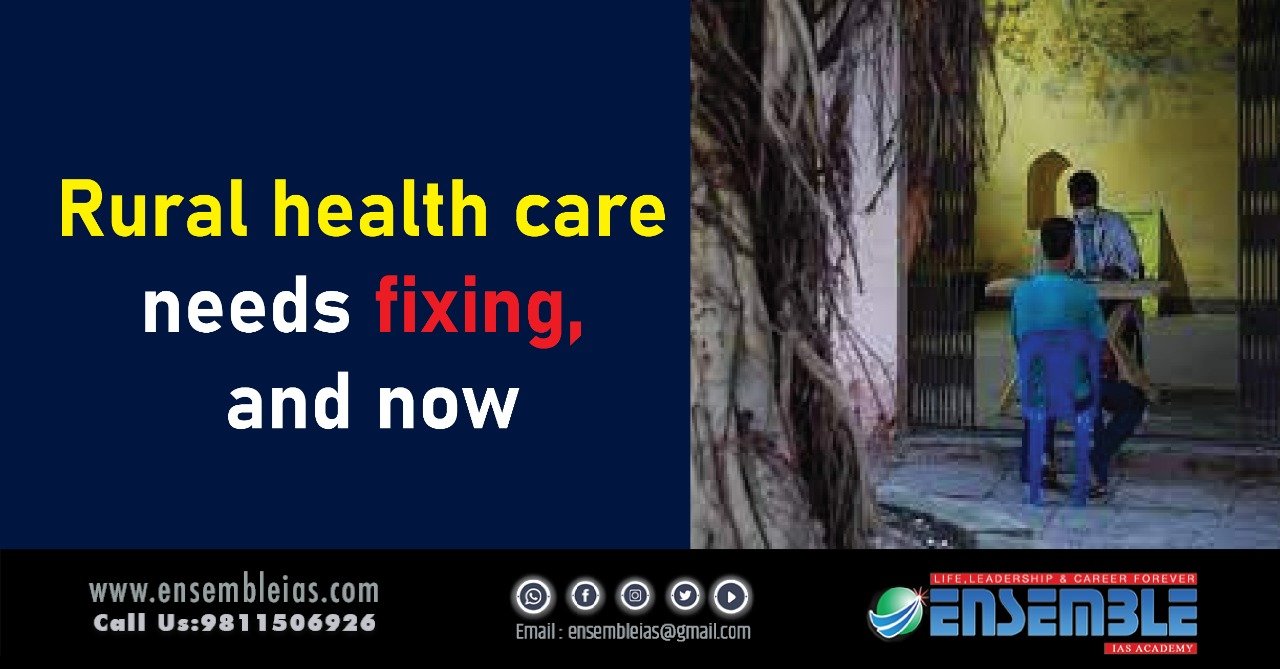 The two consecutive waves of COVID-19 and Mucormycosis have left us shattered. Multiple bruises have been caused to us. But during the second wave of the pandemic, it is our rural people who are struggling the most. They are struggling to get prompt and quality health care. The key role of health-care facilities in the rural areas is to provide regular and comprehensive health-care needs guided by the World Health Organization (WHO)’s principle of Universal Health Coverage, “ensuring that all people have access to needed health services (including prevention, promotion, treatment, rehabilitation and palliation) of sufficient quality to be effective while also ensuring that the use of these services does not expose the user the financial hardship”.

The second wave of the novel coronavirus pandemic has exposed the inadequate and poor health infrastructure in the rural areas. The fact shared by Union Minister of State for Health and Family Welfare Ashwini Kumar Choubey on July 23, 2019 in the Rajya Sabha suggest that 29,337 primary health centres (PHCs) are required in the rural areas of the country; India has 25,743, a shortfall of 3,594 units. This means that we have one PHC for 25 villages in India. This needs to be revisited. In the fast-changing health scenario, we should have one expanded PHC for every 10 villages along with the provision of some beds and other minimum necessary facilities. We have 5,624 community health centres (CHCs) against the requirement of 7,322. Data on CHCs, which act as a referral centre covering a population of 80,000 people to 1.20 lakh people, show that, overall, there is a shortfall of 81.8% specialists at CHCs as compared to the requirement for existing CHCs. As in the Human Development Report 2020, India has eight hospital beds for a population of 10,000 people, while in China, it has 40 beds for the same number of people.

The picture in Haryana

If I may talk about the health infrastructure in Haryana, which remained a backward area of Punjab till 1966, it had only one medical college in the public sector up to 2005 till I became the Chief Minister. During my tenure up to 2014, we laid much emphasis on health services; besides many private sector medical colleges, one State health university, four medical colleges (at Karnal, Faridabad and Nuh in Mewat), and one medical college for women (in the rural area of Sonipat district) were established. Called the Bhagat Phool Singh Government Medical College for Women, this is the second women’s medical college after Lady Hardinge Medical College in Delhi in the northern part of the country. We also established the All India Institute of Medical Sciences-II and a National Cancer Institute at Bhadsa village of Jhajjar district.

Yet, Haryana requires 5,070 sub-health centres (SHCs) as against the existing 2,666; 845 PHCs as against 531 at present, and 253 CHCs as against 118 working at present. As per Census 2011, Haryana has a 2.53 crore population. And, as per the norms required after each block of one lakh population, Haryana requires 253 CHCs and 845 PHCs for the whole State. When infrastructure in the health services is so poor in a progressive and prosperous State such as Haryana, one can easily estimate the inadequacy of the physical health-care infrastructure in the rural areas in other States (http://haryanahealth.nic.in/).

It is of utmost importance that governments everywhere engage with all kinds of rural community organisations such as panchayats, gram sabha, notified area committees, municipal bodies and non-governmental organisations in minimising the adverse impact of the pandemic on rural life. For that purpose, in Haryana, we constituted Swasthya Kalyan Samitis, or SKSs for all CHCs, PHCs which has proved to be an effective management structure enabling people’s participation in ensuring better functioning of rural health services.

According to worldometers.info, out of 139 crore population of India, at least 91 crore people are living in 649,481 villages. There are at least 10% of people in the urban areas who are partly settled in villages as well since they keep moving to their rural habitations quite frequently. Villages need adequate health services. Given the alarming proportion of non-communicable diseases (NCDs) in India, we cannot sit idle any longer and need to focus on the existing health infrastructure in the rural areas. This is one of the most important takeaways for us after the two waves of COVID-19 and the spread of Mucormycosis in the country. For want of well-oiled health machinery, most of our people are unaware of being in the grip of NCDs such as hypertension, diabetes and cardiovascular diseases which assume significance in the pandemic.

As per an estimate of WHO, NCDs including cases of cardiovascular disease, chronic respiratory problems and cancer cause nearly 41 million (71%) of all deaths globally and about 5.87 million (60%) of all deaths in India. It will not be humanly possible to treat them all, thereby causing premature deaths on such a large scale. Persons with such morbidities are the most vulnerable in the case of a pandemic.

I agree that the task is easier said than done, but it has to be accomplished. We have no other option but to treat the disease/s at the primary level in its first stage to create a healthy India. It will also help us save a lot of money and the resources being spent at tertiary level health care. If our SHCs work effectively, there will be less pressure on PHCs. If the PHCs function well, then there will be minimal pressure on CHCs and so on. Unfortunately, we have not been able to maintain the vibrancy and vitality of the network of health care. As a result, our vast rural populace remains deprived of critical health interventions.

The chain of SHCs, PHCs and CHCs can very well take care of the multiple health needs of our people. They should have the health data of people in their respective areas. It will enable them to identify those likely to slip into the secondary or tertiary care zone. Regular health camps will help us identify those on the verge of developing tuberculosis, hypertension, diabetes or any diseases likely to be caused because of their socio and economic conditions. A CHC or referral centre equipped with specialists will do wonders if made to work efficiently. Every CHC is supposed to have ‘at least 30 beds for indoor patients, operation theatre, labour room, X-ray machine, pathological laboratory, standby generator’ and other wherewithal. Just imagine the kind of relief we would have had today in our fight against COVID-19 if our network of SHCs, PHCs and CHCs was working efficiently.

In conclusion, I will only urge all stakeholders to revisit and refurbish our health infrastructure in the rural areas and build them in a better manner. As more than 65% of the population resides in the rural areas, we cannot ignore their health needs. WHO has its norms and yardsticks. We can have our own, perhaps even better than what has been stipulated by WHO. We also know health is a State subject, but all those living in the rural areas are not only the responsibility of the States or the Centre but also a collective responsibility. Just spending money will not take us anywhere. We have to see and ensure that the money being spent improves facilities and contributes to people’s ease of life. It is hugely challenging as a task but we have to firm up our strategies, their execution and by rigorous auditing so that we are ever well prepared not only to meet this pandemic effectively but also to make our rural folk healthier. We must remember that no one will survive unless all of us survive. As Bertrand Russell has put it, “It’s co-existence or no existence.”