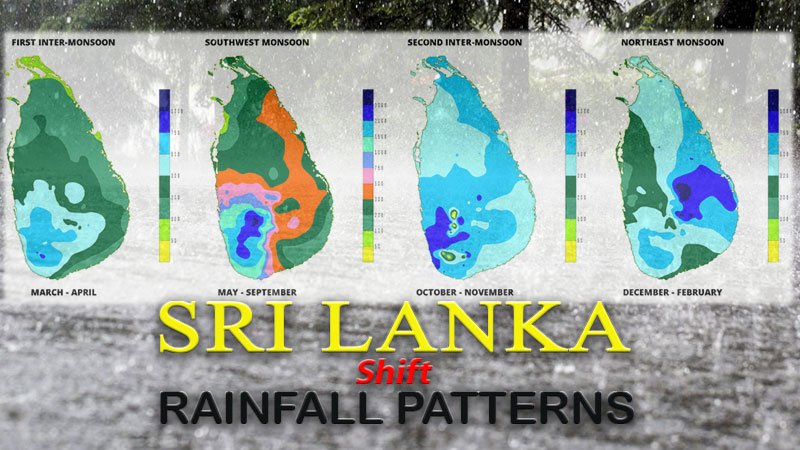 Sri Lanka shift rainfall patterns: The country has been alternating between droughts and floods over the past few years.

The outcome of their November 16 presidential poll may have given Sri Lankans much to discuss in the fortnight since, but many of them are invariably discussing another topic — the intensity of the recent spells of rain.

Even as Sri Lanka’s scheduled northeast monsoon is kicking in, the volume and force of the rainfall over the past week, almost every evening in many parts of the island, have drawn everyone’s attention.

Especially so, with the Disaster Management Centre predicting 100-150mm rainfall every day in many parts, including the north and the east that are prone to floods during heavy bouts of rain.

In a tropical country like Sri Lanka, it invariably rains at least a few days every month. Whether it is schoolchildren or office-goers, they are seldom deterred by the rain. They brave bad weather with practised ease and go about their daily routine. If the recent heavy spells came as a surprise to some locals, could there be a shift in the pattern of rainfall?

“Usually the end of November marks the onset of our second main [north-east] monsoon season. Some parts of the north and the east may be prone to flooding on days with very heavy rainfall, but the season is considered a favourable monsoon,” said Anusha Warnasooriya, Director at the Department of Meteorology. At the same time, the rainfall recorded in August and September was above average, she said.

Pointing to global phenomena such as the El Nino, the Indian Ocean Dipole (IOD) and the La Nina — in which sea-surface temperatures tend to oscillate [rise or fall] depending on certain natural conditions — Ms. Warnasooriya said shifts in rainfall are being observed globally. “Such phenomena could either enhance or reduce our monsoon or inter-monsoon spells in Sri Lanka as well.”

Around the same time last year, flash floods wreaked havoc across the northern districts of Kilinochchi, Mullaitivu, Mannar, Vavuniya and Jaffna, affecting tens of thousands of people. In September this year, one person died and nearly 50,000 were affected when several parts of the island’s Southern and Western provinces flooded with up to 200 mm rainfall recorded in certain areas.

The instances of floods come two years after Sri Lanka experienced its worst drought in 40 years. In 2017, Sri Lankan farmers’ paddy cultivation took a severe beating, even raising concerns over food security. Of the 8,00,000 hectares of paddy that Sri Lanka had hoped to cultivate that year, about 50% was damaged due to the drought. Over a million people were badly affected in the rice-eating country.

While subsequent monsoon brought some relief, the respite was short-lived. Ahead of last year’s northern floods, officials shifted from distributing drought relief to flood relief in a span of few weeks, as they tried addressing one crisis after another. While climate experts are yet to speak of any drastic departure from the usual rainfall patterns, the changes apparent are not insignificant, they say.

Lareef Zubair, principal scientist at the Kandy-based Foundation for Environment, Climate and Technology (FECT), analysed data on climate captured over more than a century. “Colleagues in other countries and I found that this is the fifth occurrence of the Indian Ocean Dipole in 150 years,” he said.

Rather than using “monsoon” and “inter-monsoon” that are commonly used to connote seasons of rainfall in Sri Lanka, Dr. Zubair prefers to go by the Maha (October to March ) and Yala (April to September) agricultural cycles that are linked to rainfall.

Much of Sri Lanka receives 50% of its annual rainfall in the three months beginning October. In case of the north and the east, the period from October to December accounts for almost 70% of the rainfall.

“We used data to study how the IOD impacts the Maha season and predicted a shift,” he said, referring to a collaborative research publication that he was part of.

As of Saturday evening, the Disaster Management Centre’s situation report said as many as five people had died and nearly 1,500 affected in the recent bout of heavy rain. The Centre has also issued a warning to residents, asking them to stay indoors.

Given that there is widely shared concern over a potential shift in patterns, are authorities prepared to tackle the changes around harvesting seasons and for water management? “The short answer is that a lot more could be done in terms of preparedness,” Dr. Zubair said.