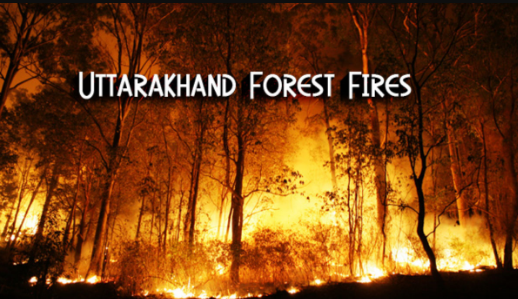 Climate crisis, human activities, and a poor response mechanism have deepened the crisis. Uttarakhand is a warning of the challenges that lie ahead in preserving India’s fragile natural ecosystems

Uttarakhand is battling one of the worst episodes of forest fires since it became a separate state in 2000. According to the state forest department, there have been 989 fire incidents between October 1, 2020 and April 4, 2021, destroying around 1,297.43 hectares of rich, biodiverse forests. Taking Suo moto cognizance of the calamity, the Uttarakhand High Court, on Tuesday, asked the senior-most forest official of the state to explain the preparedness of the department and measures that have been taken over the years to control fires, and asked the state government to explore the possibility of using artificial rain to douse forest fires, and directed it to extinguish the fires in two weeks. Since 2000, forest fires have affected over 48,000 hectares in the state. According to India’s State of Forest Report 2019, over 30,000 incidents of forest fires were reported in the country in 2019.

Forest fires are not unusual in Uttarakhand, or, for that matter, in any jungle. In Uttarakhand, it usually begins in mid-February, when the trees shed dry leaves and the soil loses moisture due to a rise in temperature, and continues till mid-June. But this year, the situation has been different because of two reasons. One, the lack of adequate rainfall in the winter, leading to dry soil, and, second, the higher-than-expected temperature in March and April, both indicating the impact of the climate crisis. The change in the weather pattern, however, is not always the only reason for forest fires. They are also caused when locals clear land, or by farming-related activities, or sometimes sheer carelessness. A Forest Survey of India study states that over 95% of fire incidents are of anthropogenic origin.

Unfortunately, the firefighting capabilities of India’s forest departments are, at best, rudimentary. They don’t have modern equipment, an adequate number of vehicles and enough field staff, which can bolster their rapid response system. In an era of the climate crisis, it’s a challenge for the forest department officers to detect and contain such fires. Along with providing the departments all support in terms of material and personnel support, it is imperative to involve local communities to not just keep an eye on the forests but also in cleaning and burning the fuel load (dry leaves etc.) in a controlled manner to prevent large outbreaks in India’s precious carbon sinks. Uttarakhand is a warning of the challenges that lie ahead in preserving India’s fragile natural ecosystems.