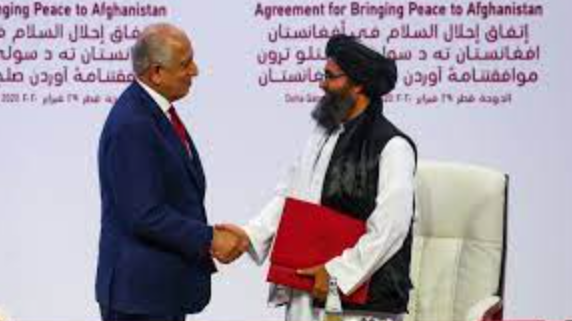 The political reality is that the Taliban had more loyal and consistent backers in Pakistan and the Inter-Services Intelligence, while the Kabul government steadily lost legitimacy because of its own incompetence and disunity, and because its backers in the West eventually lost patience and interest. By end-2021, the US may have ended its longest war, but for Afghanistan, the uncertainties are only increasing.

Afghanistan’s foreign minister, Haneef Atmar, was in Delhi this week to brief the Indian authorities on the recent spurt in diplomatic activity as the Joe Biden administration approaches the May deadline for United States (US) troops to exit Afghanistan. The problem is that the intra-Afghan peace talks have barely moved forward since the Doha agreement signed a year ago between US ambassador Zalmay Khalilzad and Taliban deputy leader Mullah Barader, and violence levels have been steadily rising, especially since last October.

Biden is the third president to deal with the challenge of bringing US troops back home. In 2009, Barack Obama described Afghanistan as “the necessary war that the US must win”. He approved a surge in troop presence, from 55,000 to over 100,000 soldiers, and also quadrupled the number of drone attacks in Afghanistan and Pakistan, but failed to blunt the Taliban insurgency. By May 2011, when Osama bin Laden was killed in Abbottabad, Obama realized that the real failure lay not in transforming Afghanistan, but in changing Pakistan’s policy of continuing to provide sanctuaries to the Taliban, even while it claimed credit as a major US partner in stabilizing Afghanistan. Frustrated, Obama reduced the troop presence to 8,500 by the time he left office in 2017.

Announcing his policy in August 2017, Donald Trump said that though his “original instinct was to pull out”, he had been persuaded by the Pentagon to push for “an honorable and enduring outcome”, and added 5,000 troops while easing restrictions on the use of airpower. However, after a year, he too changed track and Khalilah was appointed to open negotiations with the Taliban — this led to the February 2020 deal. By the time Trump left, US troops were reduced to 2,500.

The title of the deal — Agreement for Bringing Peace to Afghanistan between the Islamic Emirate of Afghanistan which is not recognized by the US as a state and is known as the Taliban and the US — showed that the Taliban’s ideology had not changed and the deal was doomed to failure. Yet, such was the willingness to suspend disbelief that Khalilzad successfully persuaded everyone that it was “a peace deal” and not a “US withdrawal deal”, and that the mouse he pulled out of the hat was a rabbit. A year later, that uncomfortable reality can’t be denied. While no American soldiers have died in combat in Afghanistan in the last 12 months, the monthly death toll is 800 Afghan security forces and 250 civilians.

The Biden administration is, therefore, seeking a “responsible withdrawal”. In an interview last week, Biden said that it is difficult for the US to leave by May, and a short extension may be needed. A new peace plan has been developed and Khalilzad retained to pull another rabbit out of a hat.

The new plan envisages replacing the present government with a transitional government that includes the Taliban, and establishing a 21-member commission (including 10 Taliban nominees) to draft a new constitution. The Taliban and the government should reach an agreement for a 90-day “significant reduction in violence” to create a conducive environment for diplomatic efforts. To energies the stalled Doha talks, Turkey has been invited to host a meeting between the Taliban and the Afghan government and other representatives to work this out. A United Nations (UN) conference (on the lines of the Bonn Conference in 2001 that worked out the political road map for a post-Taliban Afghanistan), involving the US, Russia, China, Pakistan, Iran and India, along with the Taliban and other Afghan groups is proposed to discuss a unified approach.

The UN secretary-general has announced the appointment of veteran French diplomat, Jean Arnaut, as his personal representative to lead the UN’s efforts and prepare for the international conference. Arnault knows Afghanistan well, having been there from 2002 to 2006, as deputy and then head of the UN Assistance Mission in Afghanistan.

Last week, Moscow hosted a meeting of the expanded troika (US, China, Pakistan and Russia) with the Taliban and the Afghan government and other leaders led by Abdullah Abdullah, head of the High Council for National Reconciliation. While the intra-Afghan talks were contentious, the four extended troika states issued a joint statement recognizing the Afghan people’s desire for peace, calling for a reduction in violence on all sides, expediting negotiations for a political settlement, urging Taliban not to launch a spring offensive and underlining that they do not support a return to the Islamic Emirate system.

President Ashraf Ghani is unwilling to step down to make way for a transitional government, suggesting early elections instead, but the Taliban are not interested in the electoral route. The last two elections in Afghanistan were marred by controversy, which was resolved only because the US leaned heavily on Ghani and Abdullah to share power instead. A number of prominent Afghan leaders, unhappy with Ghani, have supported a transition as have Russia, Iran and Pakistan, leaving Ghani with no options. The political reality is that the Taliban had more loyal and consistent backers in Pakistan and the Inter-Services Intelligence, while the Kabul government steadily lost legitimacy because of its own incompetence and disunity, and because its backers in the West eventually lost patience and interest. By end-2021, the US may have ended its longest war, but for Afghanistan, the uncertainties are only increasing.