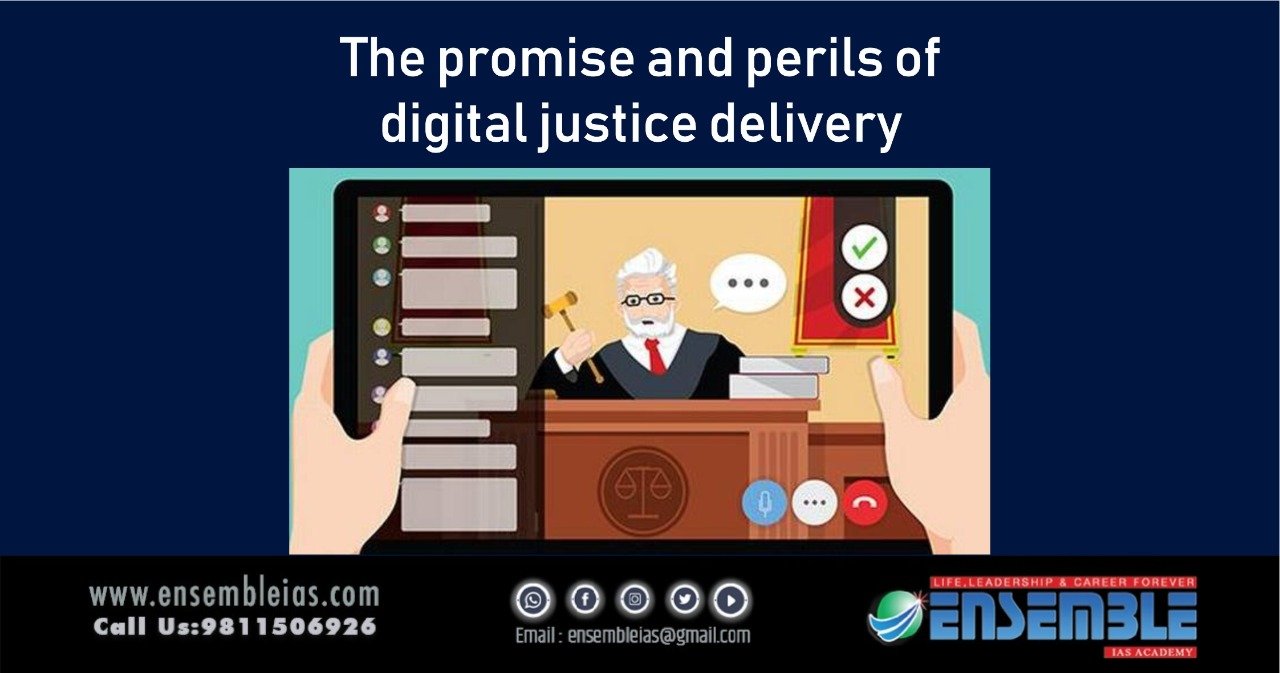 The promise and perils of digital justice delivery

In popular perception, Indian courts are not associated first with the delivery of justice, but with long delays and difficulties for ordinary litigants. According to data released by the Supreme Court in the June 2020 newsletter of the e-Committee, 3.27 crore cases are pending before Indian courts, of which 85,000 have been pending for over 30 years. Can technology be used to revolutionise India’s courts? Yes, but only when it operates within the constitutional framework of the fundamental rights of citizens. If not, technology will only further exclusion, inequity and surveillance.

The e-Committee of the Supreme Court of India recently released its draft vision document for Phase III of the e-Courts project. Phases I and II had dealt with digitisation of the judiciary, i.e., e-filing, tracking cases online, uploading judgments online, etc. Even though the job is not complete, particularly at the lower levels of the judiciary, the project can so far be termed a success. This has been particularly so during the COVID-19 pandemic, when physical courts were forced to shut down. Despite some hiccups, the Supreme Court and High Courts have been able to function online. This was made possible by the e-Courts project, monitored by the e-Committee.

Phase III of the e-Courts project, however, has reached the stage in a trilogy where the franchise starts trying to do too much and goes off the tram line. On the surface, the objectives remain noble. There is commitment to the digitisation of court processes, and plans to upgrade the electronic infrastructure of the judiciary and enable access to lawyers and litigants.

However, the document goes on to propose an “ecosystem approach” to justice delivery. It suggests a “seamless exchange of information” between various branches of the State, such as between the judiciary, the police and the prison systems through the Interoperable Criminal Justice System (ICJS). It has been pointed out by organisations such as the Criminal Justice and Police Accountability Project that the ICJS will likely exacerbate existing class and caste inequalities that characterise the police and prison system. This is because the exercise of data creation happens at local police stations, which have historically contributed to the criminalisation of entire communities through colonial-era laws such as the Criminal Tribes Act of 1871, by labelling such communities as “habitual offenders”.This is of particular concern since the data collected, shared and collated through the e-Courts project will be housed within the Home Ministry under the ICJS.

A cause for concern

Several individuals and organisations have warned against the zeal of the data collection exercises contemplated by the draft proposal. The “seamless exchange of information” relies on large-scale gathering and sharing of data. Data collection is by itself not an evil process. In fact, data can be a useful tool for solving complex problems. For example, to address the problem of cases pending simply for service of summons, Phase II of the e-Courts project saw the development of the National Service and Tracking of Electronic Processes, a software that enabled e-service of summons. It is only when data collection is combined with extensive data sharing and data storage that it becomes a cause for concern. The Supreme Court must take care not to violate the privacy standards that it set in Puttaswamy v. Union of India (2017), especially since India does not yet have a data protection regime.

Data can be useful when it provides anonymous, aggregated, and statistical information about issues without identifying the individuals. This could be made possible in Phase III by encouraging uniformity and standardisation of entry fields. Unfortunately, there has been a dangerous trend towards creating a 360-degree profile of each person by integrating all of their interactions with government agencies into a unified database. This approach has been perfected by social media platforms and technology companies, and the government is now trying to do the same. The difference is that when technology companies do this, we get targeted advertising, but if the government does it, we get targeted surveillance.

This 360-degree approach is the main objective of Phase III. Once any government department moves online, their pen-and-paper registers will become excel sheets, shareable with a single click. Localised data will become centralised. Holdovers from the analog age ought not to have an issue with this process, since it can lead to great advancements in problem-solving. However, it is the next stage which is a cause for concern even for the most vocal proponents of the digital age, which is integration with other agencies.

When integrating data from all the lower courts, the intersection lies at the higher judiciary, because those are the appellate authorities connecting all the lower courts. When integrating data of the courts and police stations, the intersection lies with the individual citizen, since it is the citizen’s interaction with these branches of the state that is being monitored. While it is understandable why the courts could reasonably benefit from access to police and prison records, courts deal with a variety of matters, some of which may be purely civil, commercial or personal in nature. No clear explanation has been offered for why the Home Ministry needs access to court data that may have absolutely no relation to criminal law. This process serves no purpose other than profiling and surveillance.

Since the Phase III vision document is a draft, there is still an opportunity to abandon the ecosystem approach. The objectives were to streamline judicial processes, reduce pendency, and help the litigants. To continue to do that within the framework of our fundamental rights, the e-Courts must move towards localisation of data, instead of centralisation. The e-Committee must prevent the “seamless exchange” of data between the branches of the state that ought to remain separate. Technology plays an important role in the project, but it cannot be an end in itself.