TURKEY LAUNCHED a military operation against Kurdish fighters in northeast Syria on Wednesday just days after US troops pulled back from the area, with warplanes and artillery striking militia positions in several towns in the border region.

Turkish President Recep Tayyip Erdogan, announcing the start of the action, said the aim was to eliminate what he called a “terror corridor” on Turkey’s southern border, but European countries immediately called on Ankara to halt the operation.

Thousands of people fled the Syrian town of Ras al Aintowards Hasaka province, held by the Kurdish-led Syrian Democratic Forces. The Turkishairstrikes had killed two civilians and wounded two others, the SDF said. 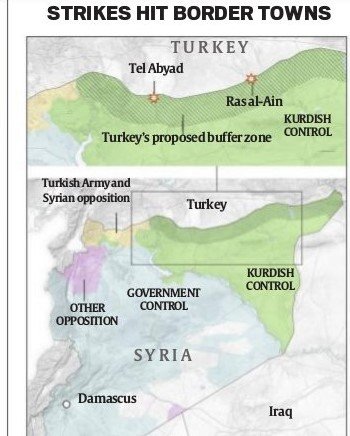 Turkey had been poised to enter northeast Syria since US troops, who have been fighting with Kurdish-led forces against Islamic State, started to leave in an abrupt policy shift by US President Donald Trump. The withdrawal was criticised in Washington as a betrayal of America’s Kurdish allies.

The artillery strikes, which also targeted YPG gun and sniper position were aimed at sites far from residential areas, the source said.

A Reuters cameraman in the In the Turkish town of Akcakale saw several explosions across the  border in the Syrian town of Te lAbyad, where a witness reported people fleeing en masse.

The SDF said military positions and civilians in the city of Qamishli and the town of Ain Issa-more than 30 km inside Syria-had been hit, and said there were initial reports of civilian casualties.

World powers fear the action could open a new chapter in Syria’s eight-year-old war and worsen regional turmoil. Ankara has said it intends to create a “safe zone” in order to return millions of refugees to Syrian soil.

Erdogan earlier told Russia’s President Vladimir Putin in a  phone call the operation would help peace and stability in Syria.

In the build-up to the expected offensive, Syria had said it was determined to confront any Turkish aggression by all legitimate means. It was also ready  to embrace “prodigal sons”, it said in an apparent reference to the Syrian Kurdish authorities who hold the northeast.

Turkey views Kurdish YPG fighters in northeast Syria as terrorists because of their tiesto militants waging an insurgency inside Turkey.

Before the 2011 uprising in Syria, the Assad regime had deprived thousands of Kurds of citizenship rights and clamped down on Kurdish political activity.

During the war, Assad focused on crushing mainly Sunni Arab rebels with the help of Russia and Iran, turning a blind eye as Kurdish fighters carved out self-rule across the north.

The Kurdistan Workers Party (PKK) took up arms against the state in 1984, waging an insurgency for autonomy in Turkey’s southeast. Since then, more than 40,000 people have been killed in the conflict.

Erdogan has said he will crush Syria’s Kurdish militia, which Ankara sees as a branch of the PKK.