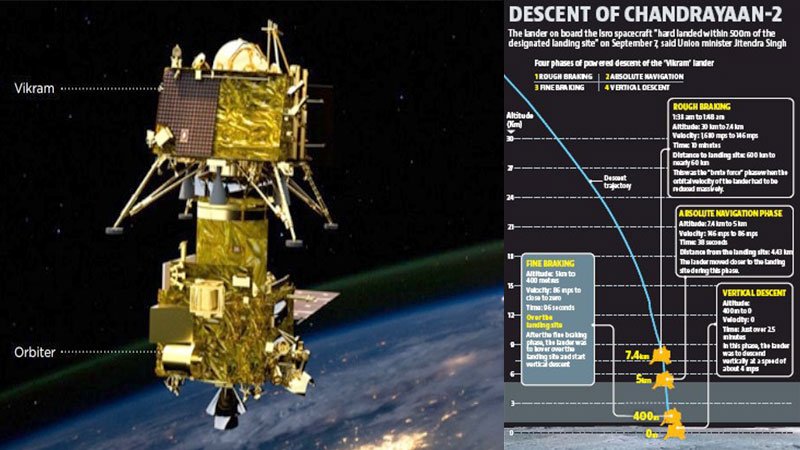 The Vikram lander of India’s moon mission Chandrayaan-2 made a “hard landing” on the lunar surface on September 7, the Union government said in Parliament on Wednesday, confirming speculation about its fate and findings by Nasa.

The lander on board the Indian Space Research Organisation (Isro) spacecraft “hard landed within 500m of the designated landing site”, minister of state for space Jitendra Singh said in a written reply in Lok Sabha.

The reply said the total cost of the project was ~970 crore; the satellites cost ~603 crore and the launch vehicle ~367 crore.

Singh added that the velocity of the lander reduced more than anticipated during a crucial period — described by Isro chief K Sivan as “15 minutes of terror” — leading to the carefully planned final stages going awry just 2.1km from the surface of the moon.

“The velocity was reduced from 1,683m/s to 146 m/s. During the second phase of the descent, the reduction in velocity was more than the designed value. Due to this deviation, the initial conditions at the start of the fine braking phase were beyond the designed parameters. As a result, Vikram hard landed within 500m of the designated landing site,” the written reply said. The minister’s response was to a question regarding the reason for failure of Vikram to land smoothly asked by BJP MP KV Singh.

After the scientific payloads aboard Chandrayaan-1 confirmed the presence of water-ice on the surface of the moon, the Vikram lander and Pragyan rover were meant to physically observe the ice and hydroxyl molecules. This was India’s first attempt to land on a celestial body with an indigenously developed robotics system. The minister’s reply explained that, during the first and the longest phase, the lander was brought down from an altitude of 30km to 7.4km in about 10 minutes without any hitch. However, during the second phase, the velocity was reduced more than anticipated, resulting in a deviation beyond the designed parameters for the start of the third phase. This was likely due to the propulsion system not working as planned, an official from Isro said.

Soon after the landing went awry, Isro had said in a statement: “Vikram lander descent was as planned and normal performance was observed up to an altitude of 2.1 km… Communication to the ground stations was lost. Data is being analysed.”

A national committee of academicians and Isro experts was set up to analyse the data and find out the cause of communication loss. “The report is unlikely to be made public, but the findings will come out in Parliament…,” said Isro spokesperson Vivek Singh.

“Vikram had a hard landing and the precise location of the spacecraft in the lunar highlands has yet to be determined,” Nasa said while releasing a photo of a 150km swathe around the landing site captured by its Lunar Reconnaissance Orbiter on September 17. It again could not locate the lander during a subsequent flyover on October 14.

“Earlier, Chandrayaan 3 was supposed to be a partnership with Japan…But now there are talks of a lander-rover mission in between. The analysis will also help Isro in understanding what went wrong and what are the other possible problems and make the next mission foolproof…,” said Ajay Lele, senior fellow at the Institute for Defence Studies and Analyses.