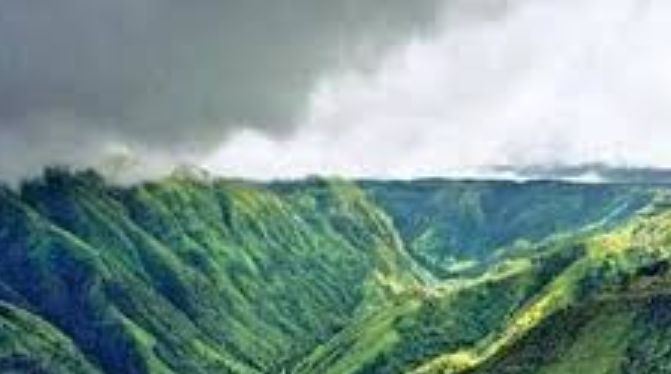 The quiet, sleepy, yet mesmerizing village of Mawsynram trounced Cherrapunji to  become the wettest place in the world. Mawsynram receives over 10,000 millimeters of rain in a year.

A recent study that looked at the rainfall pattern in the past 119 years found a decreasing trend at Cherrapunji and nearby areas. The team analyzed daily rain gauges measurements during 1901-2019, and noted that the changes in the Indian ocean temperature have a huge effect on the rainfall in the region. They also analyzed satellite data and add that there was a reduction in the vegetation area in north-east India in the past two decades, implying that human influence also play an important role in the changing rainfall patterns.

The traditional way of cultivation  known as Jhum cultivation or shifting cultivation is now decreased and being replaced by other methods. Also, previous studies have noted there is a sizable deforestation in the region. Our study also saw the decrease in vegetation cover and increase in the areas of cropland mainly from the year 2006 onwards, says  Jayanarayana Kuttippurath from Indian Institute of Technology Kharagpur. He is the lead author of the paper published last month in Environmental Research letters.

The analysis showed reductions in vegetation with 104.5 square kilometer lost per year. On the other hand there were significant increases in crop-land(182.1 sqkm per year) and urban and build-up lands (0.3 sqkm per year) during the period 2001-2018.

The team noted that the annual mean rainfall for the period 1973- 2019 showed decreasing trends of about 0.42mm per decade. It was satistically significant along seven station (Agartala, Cherrapunji, Guwahati, Kailashahar, Pasighat, Shilong and Silchar).

But why study the north-east region? The team writes that since northeast India is mostly hilly and is an extension of the Indo-Gangetic plains, the region is highly sensitive to changes in regional and global climate. It has to be noted that the first signs of the effect of climate change will be evident for the extreme cases such as the rainfall at Cherrapunji, adds the paper. Northeast India has the highest vegetation cover in India and includes 18 biodiversity hotspots of the world, indicating the importance of the region in terms of its greenery and climate-change sensitivity.

Read More: Clouds over the Quad?

The team is currently looking at the changes in rainfall patterns across India. We need to conserve the vegetation or forest area, biodiversity parks, the hills and valleys in the northeast. Also, solid water  management strategies are inevitable to combat climate-induced changes of water bodies and ground water. Long-term plans are necessary, adds Prof. Kuttippurath.