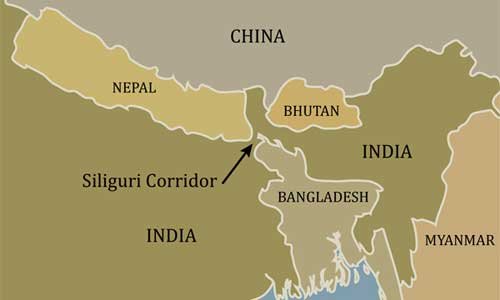 The Siliguri corridor, a narrow passage to India’s eight north-eastern (NE) states, is a perennial threat to our security. Strategically, it is the Achilles heel in the defence of almost 2,000 km of borders in the NE states with China and Myanmar. This piece of land is about 60 km in length but a meagre 22 km in width at its narrowest point. With plain terrain not interspersed with any natural or man made obstacles, this patch makes defence a real challenge.

Undoubtedly, this 2,000 sq km stretch of land will be the prime and early target of the enemy during any confrontation. Naturally, the road corridor passing through this narrow corridor becomes a vital piece of ground which must be defended at all costs.

In 2003, India and China came to an agreement whereby China agreed to Sikkim’s addition to India and gave up all claims to the state and India recognised China’s sovereignty over Tibet. Whilst this significantly reduced the escalation in the India-Bhutan-China tri-junction region, China’s attempts to seize de facto control over the region continued. It culminated in the Doklam standoff between India and China during June-August 2017.

The threat to the Siliguri corridor (also known as Chicken’s Neck) is perennial as China has continued its overt road and airstrip construction activities on its side of the border. This could allow China to rapidly mobilise and deploy troops thereby threatening the Siliguri corridor. Furthermore, the deployment of artillery, missiles or anti-aircraft weaponry could easily jeopardise India’s efforts to resupply the region in time of war, especially considering that there is only a single railway line through the region to NE states.

Widening and strengthening this corridor is imperative. The first option for India is to enter into a treaty with Bangladesh permitting not only transit of military equipment during times of conflict but also civilian traffic and trade activities. This would add a layer of strategic depth in the region and alleviate (in some measure) concerns of the possible severance of the north-east with the mainland.

The treaty can cover multi-modal transport including road and rail and a smooth movement of freight and personnel. With the revival of Bimstec India’s relations with Bangladesh have seen a fillip, with seven pacts on important mutual issues signed during Prime Minister Sheikh Hasina’s recent four-day visit. India and Bangladesh have already mooted a proposal to facilitate transit with India’s landlocked north-east and PMs of both countries have issued joint statements in this regard in 2010 and 2016.

Currently, there is a joint working group which is examining the possibility of connecting Mahendraganj in Meghalaya to Hili in Bengal through Goraghat, Palashbari and Gaibandha in Bangladesh. This distance of about 100 km could easily be developed into an elevated road and rail corridor through Bangladesh. Such a corridor, if built in PPP mode can result in regular tariff to Bangladesh and provide a shot in the arm to trade and tourism in NE states.

The second option is to strengthen connectivity to the tri-junction area at Doka La so that our response as well as surveillance capability is augmented. Towards this, recent reports of converting the erstwhile mule track to Doka La into a black-top road by the Border Road Organisation and reducing the travel time from 7 hours to 40 minutes is a step in the right direction.

The third option is to make alternate transport arrangements which are safe and secure within the country itself. The development of a multi-modal transport corridor through Siliguri itself can be undertaken by India. As part of this initiative we can even build underground road tunnels which are less likely to be susceptible to air and artillery attack in a time of a military conflict.

Underground tunnelling through this vulnerable stretch, although costly, can give India a little more room to take harder militarily options, if required. Underground expressways and high speed rail connectivity through this corridor will also help to scale up the movement of civil and military traffic. This would also enhance trade and tourism of the NE region manifold during peacetime.

With some of these measures India can look to overcome the constraints imposed by geography and improve its position with regard to China.