Even today, the virtues Shivaji Maharaj had are hard to cultivate. No king ever born was like him and no one ever will be born can be slightly like him. Values to become a great man can be learnt by reading about him and one can imagine how great Chhatrapati Shivaji Maharaj is. Born on February 19th 1630 to Shahaji Bhosle and Jijabai in the fort of Shivneri, near Pune, Shivaji was taught a strict sense of right and wrong by his mother. Responsibility of his education was on shoulders of a small council of ministers. Shivaji learnt martial arts and gained military knowledge from a very young age. At the age of 16 he set out to capture Torna fort of Bijapur Kingdom.

By 1647, he successfully gained control over much of southern Pune region. To contain Shivaji, Adil Shah sent Afzal Khan and stood with him a huge army. Shivaji was a practical military commander who didn’t encourage soldiers to be martyred. He was widely known for his guerrilla warfare tactics and it was because of those virtues, Chhatrapati Shivaji Maharaj managed to kill Afzal Khan in one on one battle who was not a veteran general but also superior to Shivaji in size and strength.

All the moral values learnt from his mother, Shivaji had immense respect for women. He was always in the support of women’s rights and for him of all the rights of a women, motherhood was the greatest. In his rule, brutality against women was severely punished, even in the territory of his enemies, women were left unharmed. Women were treated with nothing but respect.

GREATNESS COMES FROM WITHIN Chhatrapati Shivaji Maharaj was never born king, kings like him are made, a transformation that comes from inside, courage which is in a man’s heart but not in weapons.
Rising from nothing, he obtained whatever he wanted and in that process, he considered even the smallest factor. His precision and strategies are still today’s example. Chhatrapati Shivaji Maharaj is considered to be the Father of Indian Navy, protecting the sea from foreign invaders.

Being great in guerrilla warfare, threat of his raids, ambushing surprise attacks made spine of his enemies shiver. Knowing the geography of his land, he could skill fully use tricks to win over his enemies. He converted 2000 soldiers into an army of 10000, which was initially relatively small but under a commander like him, it not only became bigger in size but much more proficient. Shivaji took much care to protect his ports by navy. Soon Shivaji was able to become a threat even to Delhi Sultan who felt him breathing down his neck. 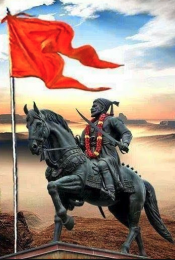 Chhatrapati Shivaji Maharaj was extremely caring towards the civilians, even in his raids, he never allowed raiders to attack civilian homes and religious places.
But not everyone is Chhatrapati Shivaji Maharaj. With time and his character of a true king, he grew stronger and stronger. He began attacking Mughal territories. Aurangzeb felt him as threat closing on him, i.e.,

Mughal territories. Shaista Khan, Mirza Raja Jai Singh and even his own son, Muazzam were sent by Aurangzeb to stop Chhatrapati Shivaji Maharaj. Shivaji lost few battles and was even captured by Mughal but Maharaj was indomitable. Every mountain in his path, with confidence like him, was just a pile of clay. A direct threat to Aurangzeb made it clear that Shivaji was now attacking the trunk and leaves like smaller kings would fall on their own. During his conquest Shivaji made Aurangzeb lose his nerve. At the end Shivaji retrieved most of his territories he lost during his capture in just a span of 4 months. Virtues like his are hard to get, hard to cultivate and hard to keep up. Today, all we can do is learn from him as an icon of bravery, a great king who once walked on the land where we stand today. Freedom, a boon which everyone’s right was his vision that we enjoy today.
Today we remember Chhatrapati Shivaji Maharaj, as a true king who knows how to win even when the battle is lost, a true king who knows how to live even when his life is lost. True king, Chhatrapati Shivaji Maharaj.