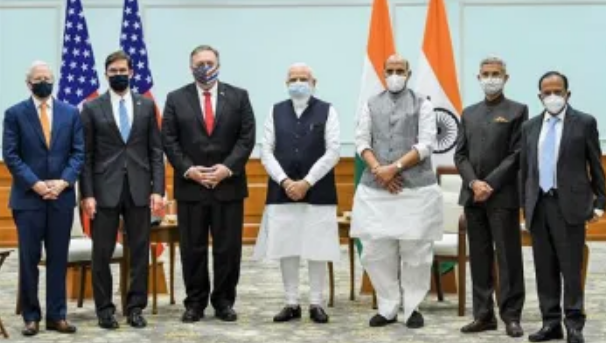 Latest meeting, soon after agreement with China on disengagement, shows India’s interest is not tactical but strategic

Disproving the widespread skepticism in Delhi about the Biden Administration’s support for the Quad — the quadrilateral security framework involving Australia, India, Japan and the United States — the foreign ministers of the four countries conferred virtually on Thursday to reaffirm their commitment to a forum that drew much international attention during the Trump years. The real significance of the meeting was in the fact that the Biden national security team wanted to convene it within the first month of its tenure. The read-outs from the four ministers touched on all the familiar Quad themes — maritime security in the Indo-Pacific, counter-terrorism, cooperation on COVID-19 management, and building supply chain resilience. The only new element — support for rule of law and democratic restoration in Myanmar — was a response to the unfolding events in that country.

That the Quad has not only survived the political transition in Washington but is set to thrive does not surprise those who recall bipartisan American support for the institution formed in 2007, when George W Bush was the president. Although the Quad went into a political coma soon after, thanks to political reservations in Canberra and Delhi, President Barack Obama recognized that a rising China demanded a new geopolitical framework and strategic institutions. The idea of a “pivot to Asia” and the framing of the “Indo-Pacific” as a theatre emerged from the Obama Administration. The Trump Administration made the idea of Indo-Pacific its own and was eager to revive the Quad in 2017. The other three responded positively as the challenges posed by China could no longer be ignored. The momentum behind the Quad picked up in 2020 in the wake of the COVID-19 crisis, China’s growing assertiveness, and deterioration of Beijing’s bilateral relations with all Quad partners.

A second source of confusion about the Quad lies in the assumption that Delhi is a reluctant member. That was certainly true under the UPA government which was hesitant to acknowledge the challenges from China and unwilling to deepen ties with America. If the Narendra Modi government was eager to shed the “historic hesitations” of the Congress party in engaging the US, it had no problem seeing the strategic consequences of China’s rise. Many observers tend to conflate India’s support for the Quad with the military confrontations on the China frontier in 2017 and 2020. Hence, the recent assessments that India might walk away from the Quad once the current military crisis in eastern Ladakh eased. This week’s Quad meeting, so soon after the agreement with China on Ladakh disengagement, underlines that India’s interest in the Quad is not tactical but profoundly strategic. For India the Quad is really about addressing the growing power imbalance with China that has manifold consequences for India’s security and prosperity as well its regional and international standing. While Delhi’s foreign policy traditionalists remain rather defensive about the Quad, Modi’s team evidently views it as an unprecedented strategic opportunity for India to shape the emerging regional and global order.