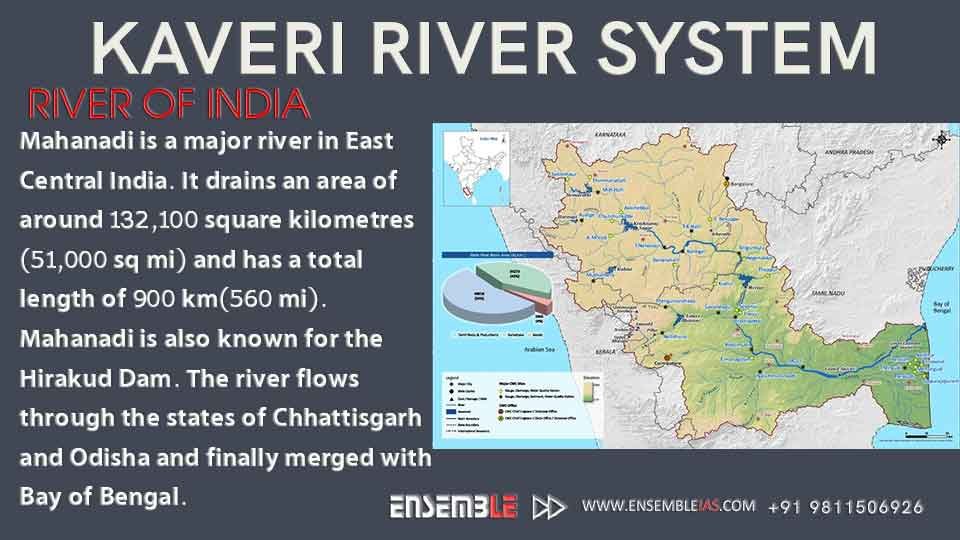 Kaveri River (also spelled Cauvery or Kavery) is one of the great rivers of India and is considered sacred by the Hindus. This river is also called Dakshin Ganga. The headwaters are in the Western Ghats range of Karnataka state, and from Karnataka through Tamil Nadu. It empties into the Bay of Bengal. Its waters have supported irrigated agriculture for centuries, and the Kaveri has been the lifeblood of the ancient kingdoms and modern cities of South India.

The source of the Kaveri River is Talakaveri located in the Western Ghats about 5,000 feet (1,500 m) above sea level. Talakaveri is a famous pligrimage and tourist spot set amidst Bramahagiri Hills near Madikeri in Kodagu district of Karnataka. Thousands of piligrims flock to the temple at the source of the river especially on the specified day known as Tula sankramana when the river water has been witnessed to gush out like a fountain at a predetermined time. It flows generally south and east for around 765 km, emptying into the Bay of Bengal through two principal mouths. Its basin is estimated to be 27,700 square miles (71,700 km²), and it has many tributaries including Shimsha, Hemavati, Arkavathy, Kapila, Honnuhole, Lakshmana Tirtha, Kabini, Lokapavani, Bhavani, Noyyal and Famous Amaravati. Kaveri  (Cauvery) River basin extends over an area of 81155 sq.km. which is nearly 2.7% of the total geographical area of the country. It is bounded on the west by the Western Ghats, on the east and south by the eastern Ghats and on the north by the ridges separating it from the Tungabhadra and Pennar basins. The basin lies in the States of Tamil Nadu, Karnataka and Kerala. The State-wise distribution of drainage area is given below