Mahanadi is a major river in East Central India. It drains an area of around 132,100 square kilometres (51,000 sq mi) and has a total length of 900 kilometres (560 mi). Mahanadi is also known for the Hirakud Dam. The river flows through the states of Chhattisgarh and Odisha and finally merged with Bay of Bengal. The Mahanadi is a river of eastern India. The Mahanadi rises in the Satpura Range of central India, and flows east to the Bay of Bengal. The Mahanadi drains most of the state of Chhattisgarh and much of Orissa and also Jharkhand and Maharashtra. It has a length of about 860 km. 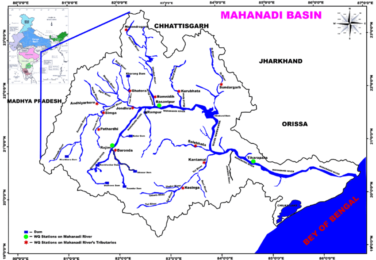 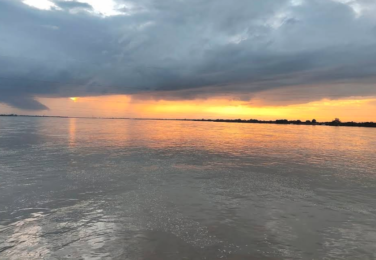 Near the city of Sambalpur, a large dam – the Hirakud Dam – is built on the river. 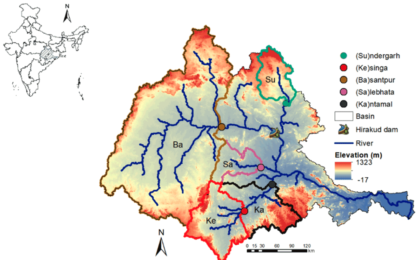 Average annual surface water potential of 66.9 km has been assessed in this basin. Out of this, 50.0 km is usable water. Cultural area in the basin is about 80,000 square kilometres (31,000 sq. mi), which is 4% of the total cultural area of the country.

Present use of surface water in the basin is 17.0 km. Live storage capacity in the basin has increased significantly since independence. From just about 0.8 km in the pre-plan period, the total live storage capacity of the completed projects has increased to 8.5 km. In addition, a substantial storage quantity of over 5.4 km would be created on completion of projects under construction. Additional storage to the tune of over 11.0 km would become available on execution of projects under consideration. The hydropower potential of the basin has been assessed as 627 MW at 60% load factor.

At its peak during the monsoon, the Mahanadi has a discharge rate of 2,000,000 cubic feet (57,000 m) per second, almost as much as the much larger Ganges. However owing to its seasonal nature the river is mostly a narrow channel flanked by wide sand banks for most of the year.