The traditional source of the river is a spout from the mouth of a statue of a cow in the ancient temple of Mahadev in Mahabaleshwar. Its most important tributary is the Tungabhadra River, which itself is formed by the Tunga and Bhadra rivers that originate in the Western Ghats. Other tributaries include the Koyna, Bhima, Mallaprabha, Ghataprabha, Yerla, Warna, Dindi, Musi and Dudhganga rivers. The Krishna Basin extends over Andhra Pradesh, Maharashtra and Karnataka having a total area of 2,58,948 Sq.km which is nearly 8% of the total geographical area of the country. The basin has a maximum length and width of about 701 km and 672 km and lies between 73°17’ to 81°9’ east longitudes and 13°10’ to 19°22’ north latitudes. It is bounded by Balaghat range on the north, by the Eastern Ghats on the south and the east and by the Western Ghats on the west. The Krishna River rises from the Western Ghats near Jor village of Satara district of Maharashtra at an altitude of 1,337 m just north of Mahabaleshwar. 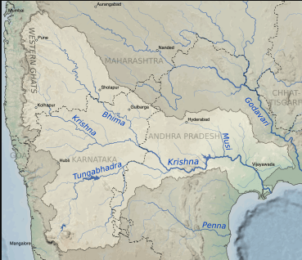 The total length of river from origin to its outfall into the Bay of Bengal is 1,400 km. Its principal tributaries joining from right are the Ghatprabha, the Malprabha and the Tungabhadra whereas those joining from left are the Bhima, the Musi and the Munneru are joining the river from left. The major part of basin is covered with agricultural land accounting to 75.86% of the total area and 4.07% of the basin is covered by water bodies. The basin spreads over 56 parliamentary constituencies (2009) comprising 23 of Andhra Pradesh, 18 of Karnataka, and 15 of Maharashtra.